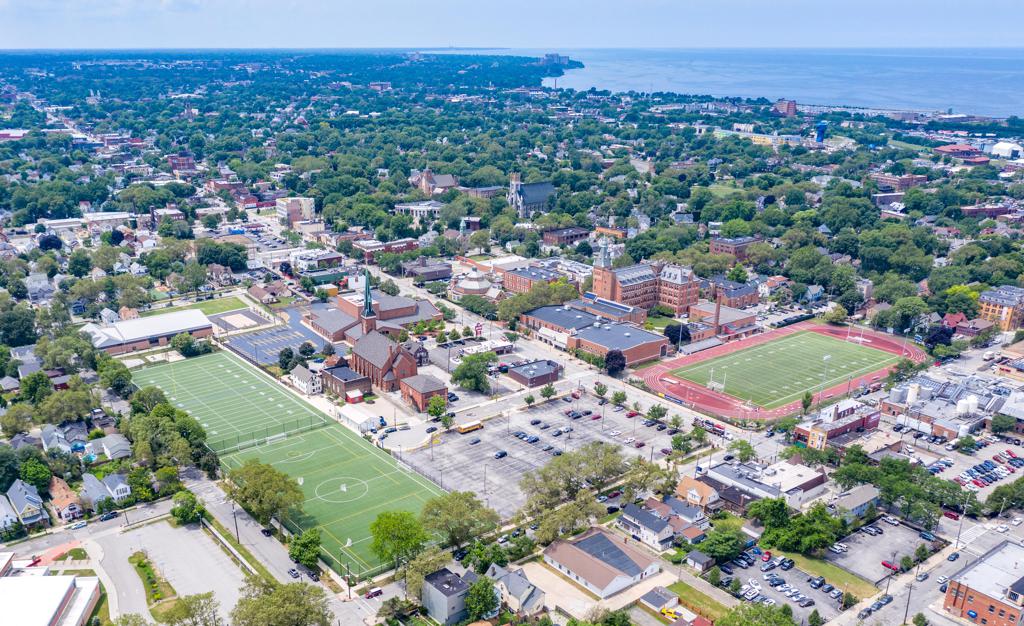 In June 2019, the brand-new Carfagna Family Magis Athletic Center (the MAC) was unveiled after a year of construction at 3100 Chatham Avenue.

The fieldhouse is the result of a years-long dream by the Saint Ignatius Athletic Department to have an indoor space for practices and meeting during the long, cold winter months and on rainy days. With 16,500 square feet, the facility will host a number of sports, including baseball, golf, and crew. The MAC features five batting cages (which can be raised), a golf simulator, and ergs for Saint Ignatius rowing.

The indoor space will primarily be utilized by Saint Ignatius Athletics, but the MAC is available for rent to outside organizations. With questions, contact Brad Ganor at bganor@ignatius.edu.

Due to a growing need for additional and adequate practice space, renovations to our athletic practice fields south of Lorain Avenue will be practical as well as aesthetic. The fields, known as Kyle and McLaughlin Fields, honor our legendary football and soccer coaches. Renovations call for artificial turf with lines for multiple sports.

Construction on the fields began May 1, 2017, and was completed in October 2017. The fields were officially dedicated on Monday, October 23, and blessed by President Rev. Raymond Guiao, S.J. '82.

The renovations include three acres of synthetic turf field with the creation of two synthetic turf practice fields lined for football, rugby, soccer and lacrosse – separated by safety netting or used as one large field.

The fields are open for community use, with lights keeping the field lit for children and adults alike to use the field when the Wildcats are not practicing.

For more information on the Campus South Athletic Complex visit www.ignatius.edu/campus-south. If you are interested in supporting our project, contact Garen Distelhorst '96 or make a gift in support of the athletic program through the Fr. Sullivan Fund for Athletics. 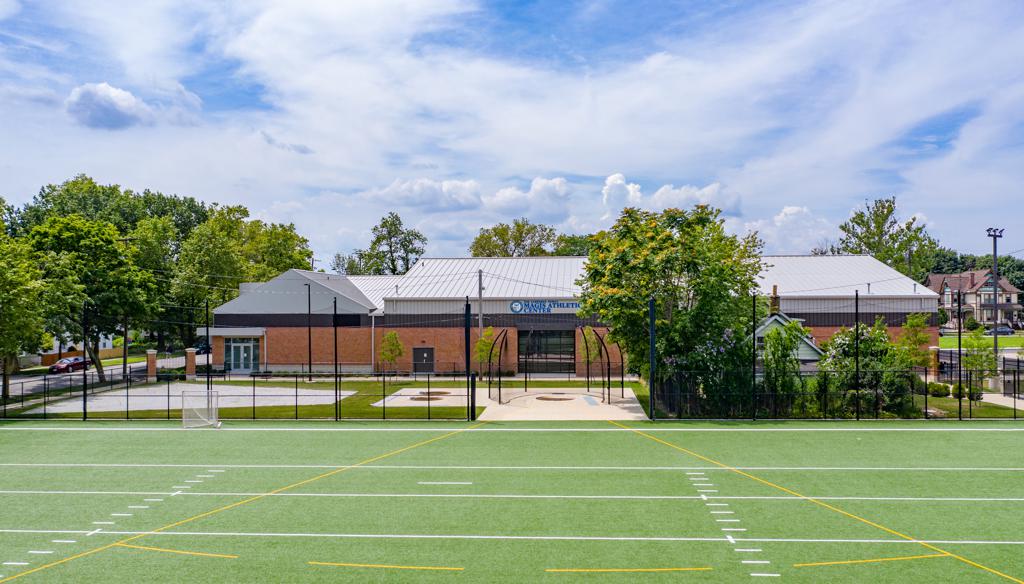 The view of the MAC exterior from Kyle Field. 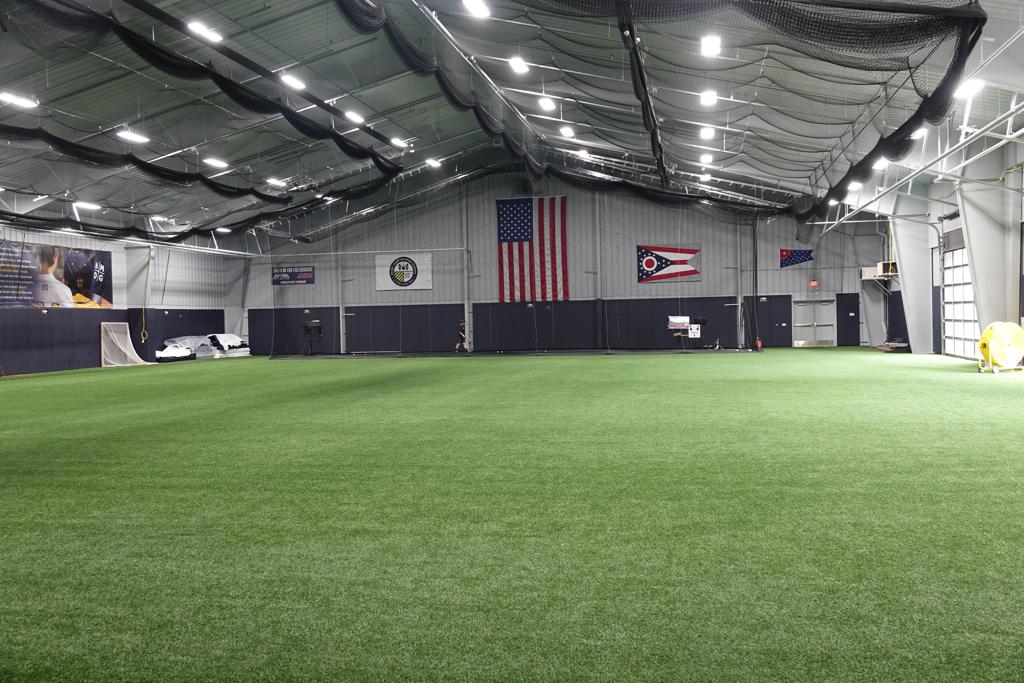 An interior view of the MAC with the batting cages raised. 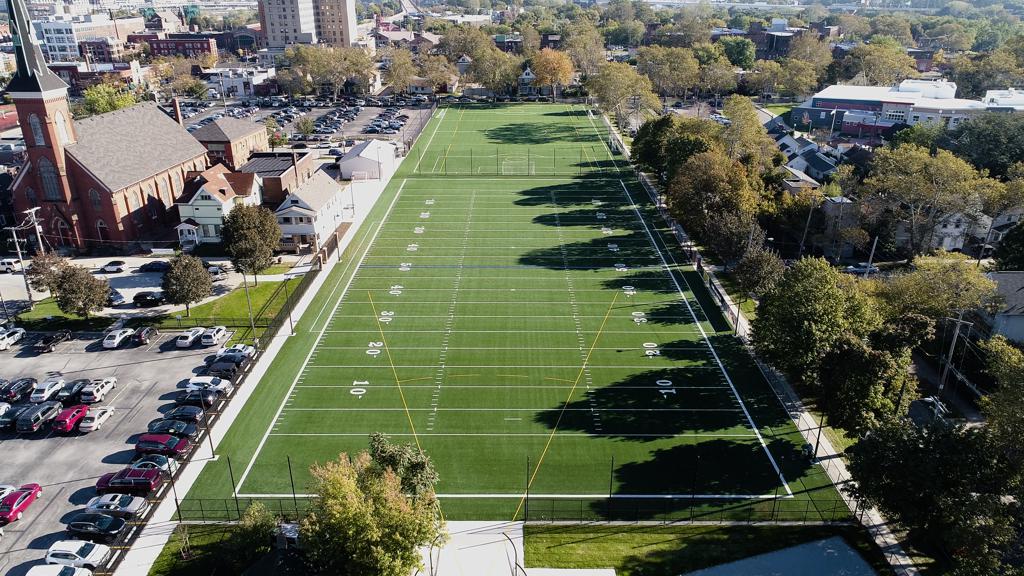 An aerial shot of Kyle and McLaughlin Fields. 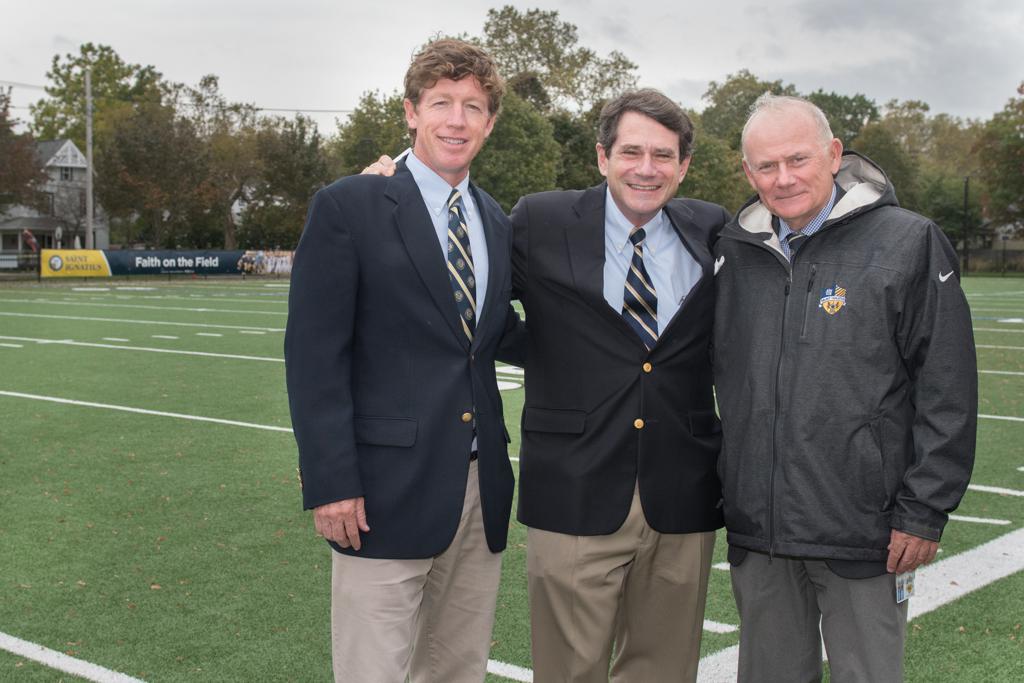 Long ago, the space where Wasmer Field resides was a parking lot and buildings. In 1983, the property was dedicated as Wasmer Field.

The field has received renovations since. In 1998, the field was turfed, allowing students to practice nearly year-round without damaging the field.

A few years ago, the Wasmer Field surface was upgraded with new artificial turf.

Today, Wasmer Field hosts soccer, JV and freshman football, rugby, and lacrosse games. Many teams use the field or track for practice, too.

Over the years, for its highest attended events, Wasmer Field has hosted nearly 1,500 fans packed in the stands and around the track.

Wasmer Field (click the picture for a virtual tour)

In 1953, Sullivan Gymnasium was constructed, replacing Carroll Gym as the primary space for the basketball team.

Since then, Sullivan Gym has received significant upgrades, from scoreboards to new seats and an upper balcony, where the baseball team often practices in the winter.

Besides basketball, the gym also hosts volleyball and wrestling matches.

Sullivan Gym (click the picture for a virtual tour)

Thanks to the generosity of the Panteck family, the renovated Saint Ignatius Strength & Conditioning Center was dedicated in 2015, giving the Wildcats the perfect place to train.

The facility doubles the size of the old space, and includes new weight equipment for students to use. Open to both students and student-athletes, the facility provides a safe environment for the Wildcats to train and stay in shape under the full-time direction of a strength and conditioning coach.

In 2013, the Saint Ignatius wrestling program received a big boost.

Through the generosity of Michael E. Gibbons '70, the beautiful, new Eugene V. Gibbons Wrestling Complex was opened for the wrestling team's usage on West 32nd Street.

The facility bears the name of Michael Gibbons' father, Eugene V. Gibbons, a high school wrestling legend who competed for the West High Cowboys and Michigan State Spartans and was inducted into the National Wrestling Hall of Fame in 2012.

Gibbons Hall also houses the Labre Ministry, a classroom and the faculty/staff gym. 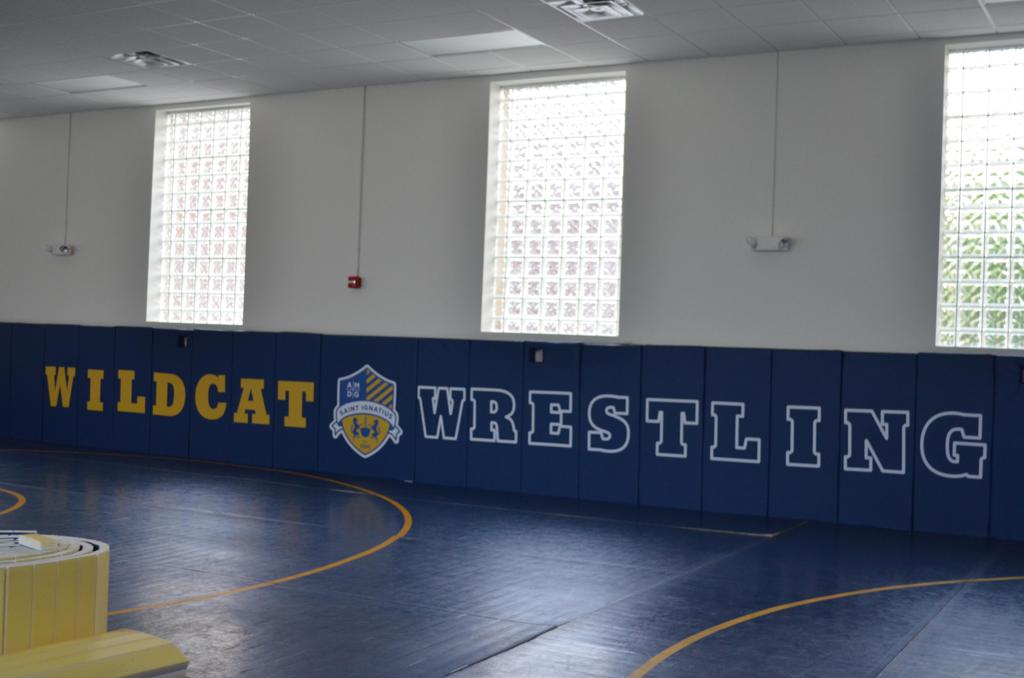 In 1993, thanks to the generosity of Saint Ignatius founder Murlan J. Murphy '36, Murphy Field House was opened at Saint Ignatius.

The gym is dedicated to intramural sports for all students to use. When he provided for the construction and endowment of the Murphy Field House, Murphy said, “Competitive sports teach some of life’s important lessons. The competition teaches not only how to win, but how to lose, and how to come back the next day to work at it again.”

He made it possible for every student at Saint Ignatius High School to have that opportunity, coining Murphy’s Law, ‘Everybody Plays’. 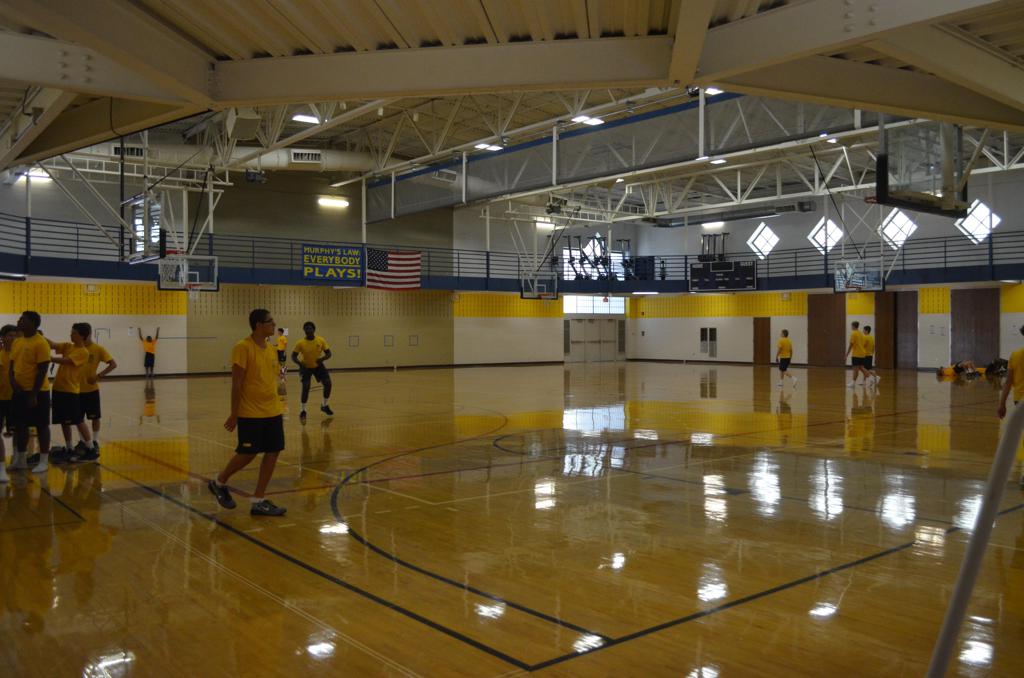 Built in 1928, Byers Field has long been a landmark in Parma, Ohio. But Parma schools are not the only programs to utilize the facility.

The Wildcats have played in Byers Field, recently dedicated as Byers Field at Robert M. Boulton Stadium, in 32 of the last 34 seasons. The Cats' first home game at Byers was versus Canton McKinley on October 7, 2000.

Ever since, Byers Field has served as the Wildcats' home stadium for football. Since its construction, Byers has been renovated five times, including in 2013.

The facility now seats about 11,850 fans, plus over 30 members of the media in its renovated press box. The stadium features lights, artificial turf, and locker rooms for both home and away teams.

Byers Field at Robert M. Boulton Stadium is named after Carl C. Byers, the Parma Schools superintendent who led the 1953 renovation of the stadium, and Robert Boulton, a retired Superintendent of Athletics for the Parma City Schools and a Parma Senior High grad. 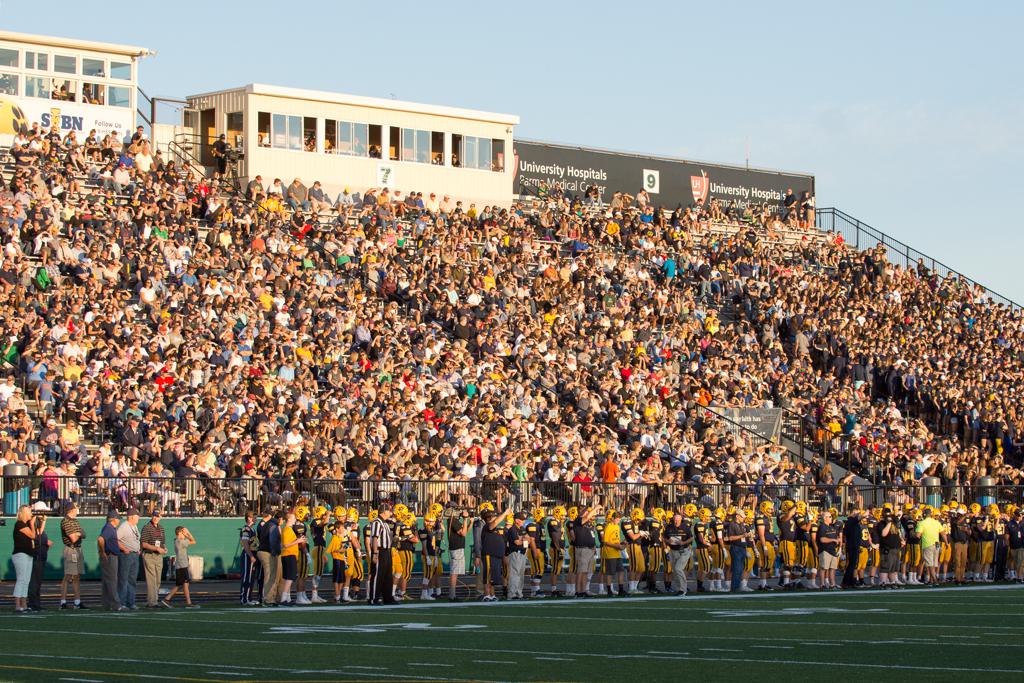 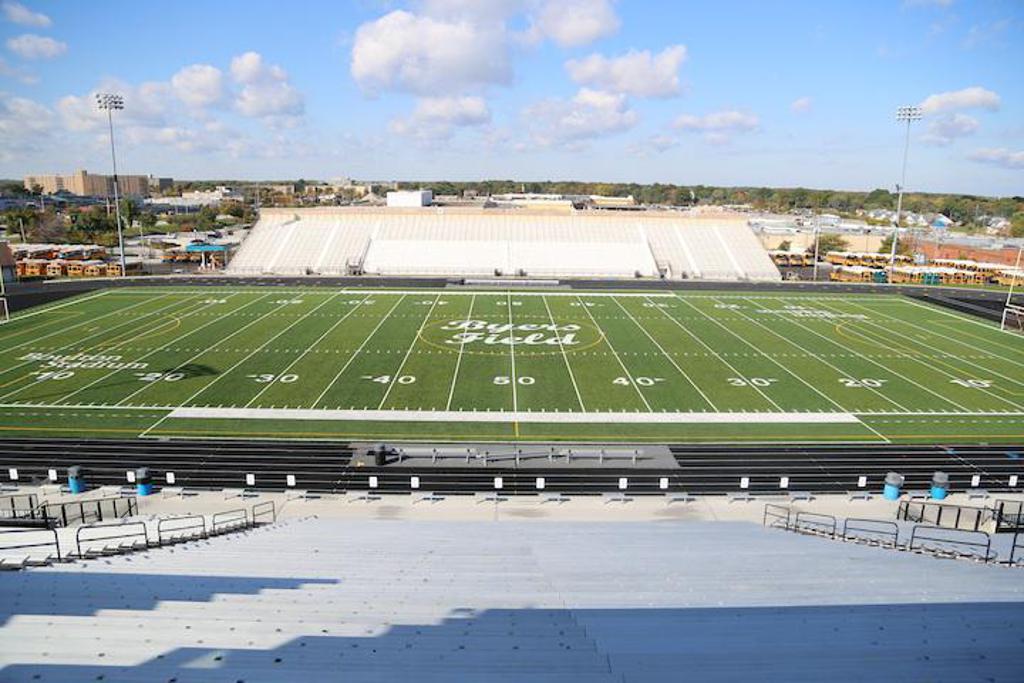 A view from the Byers Field press box

Sullivan Gym (click the picture for a virtual tour)