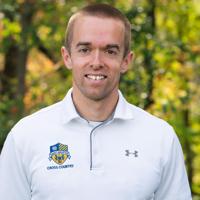 Science teacher Bob Wolf ’08 is a man who knows how to put in the work. You’ll find him on campus, sometimes before dawn, sprinting around Gabor Track, or completing a lift in the Strength & Conditioning Center. He’s a determined athlete, but also a smart one—a guy who seeks out the science behind his sport. That he’s a veteran in the classroom, trusted by students, is just another reason that he will find success as he takes over the storied Track & Field Program.

“I am very excited to see Bob leading our Track & Field program,” says Athletic Director Rory Fitzpatrick ’88. “The level of knowledge and talent that our student-athletes will receive will certainly ensure that they continue to grow as young men, as well as find success around the track.

Wolf succeeds English teacher and Head Football and Track & Field Coach Chuck Kyle ’69, who led the Wildcats for 50 years. Wolf has coached alongside Kyle since he joined the faculty in 2014; he also ran for Kyle during his high school days.

No doubt, Wolf’s work as the Head Cross Country Coach will complement his new role leading Track & Field, as he helps the Wildcat Harriers to build fitness, increase toughness, and finesse their form on the trail and the track.

"I always like the science behind the speed, efficiency, and development of running," says Wolf. He is a technique coach. "They know what I expect from them," he says. "I coach to individual strengths."

Helping Wolf guide the program will be History teacher Alicia Mayer, who is a veteran of the coaching staff and will now serve as Associate Head Coach.

Wolf and the Cross Country Cats were featured in the Fall 2021 issue of Saint Ignatius Magazine as he was making his head coach debut. Senior captain Matt Kelly ’22, who also ran track for four years, said at the time: “When you have someone like Coach Wolf lead the team, not just because of his knowledge but because of who he is, too, we all trust him.”

That trust is certainly well placed in Wolf, who has learned from Coach Kyle and also legendary Cross Country Coach Mike “Doc” Gallagher ’71. He has been coached and mentored by the best, and so his best as a coach is what the Wildcats will certainly get.