Head Football and Track & Field Coach Chuck Kyle '69 will retire after the 2022-23 school year. Defensive Coordinator Ryan Franzinger '02 will become the next head football coach in 2023. 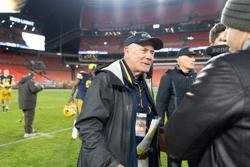 The 2022-23 school year will be Coach Kyle's 50th as a teacher and coach at Saint Ignatius High School.

One of the country’s most respected and accomplished high school football coaches is preparing to hand over the reins of the program he has built into a national powerhouse over the course of four decades.

Chuck Kyle ’69, a longtime English teacher and Head Football and Track & Field Coach at Saint Ignatius, plans to retire following the 2022-2023 school year. The 2022 season will be his last at the helm of the Saint Ignatius Football program.

“Honestly, in a humble way, everyone, when it’s time to leave, should leave a place better than what it was when they first came,” Kyle says. “It’s a better place now. I think it is.”

Defensive Coordinator Ryan Franzinger ’02, who currently serves as the Assistant Principal for Student Discipline, will become the Associate Head Coach for the 2022 season before assuming the role of Head Football Coach in 2023. He will also transition to teaching in the Theology department beginning in fall 2022.

Next year will be Kyle’s 51st as a football coach at Saint Ignatius. He spent 11 years as an assistant and the Fall 2022 season will be his 40th leading the program.

There may well be no high school football coach in the country with a greater reputation than Coach Kyle. Under his leadership, the Wildcats have won a record 11 OHSAA State Championships, four national titles, and collected 369 wins. “Chico” was named Nike National Coach of the Year in 2001, Schutt National Coach of the Year in 2008, Ohio Associated Press Coach of the Year four different times, and was inducted into the Greater Cleveland Sports Hall of Fame in 2013. MaxPreps named him the sixth greatest high school football coach of all time, in 2018. What’s more, he has guided the Track & Field program for nearly 50 years, collecting two state titles along the way. Kyle also received the Magis Award, the school’s highest honor, in 2012.

“His impact on Saint Ignatius High School is immeasurable,” says Athletic Director Rory Fitzpatrick ’88. “Chico’s impact, certainly as a teacher, but as a coach coming together with the group of guys he gathered together, it’s one of those special moments where a lot of things came together at one time. And Chico was the leader of the football program at that time and with his guidance and his leadership that great group of people did great things.”

“But when you get away from the big words, his greatest and most lasting legacy are the personal connections with the guys that played in his programs in track and in football, and the guys that he teaches in the classroom. If you try and quantify it with individual people, you get a very real sense of his importance here and how he taught guys, and lived the mission, and showed people what it means to be a Man for Others.”

Clearly the accomplishments of a 50-year coaching career cannot be separated from the character and work ethic of the man. Indeed, when Kyle took on the role of head football coach alongside the late Dale Gabor ’66, who served as his Athletic Director, the two committed themselves to building the program “the right way.”

Kyle began coaching at Saint Ignatius in 1972 while he was a senior at John Carroll University and started teaching here in 1973 after he earned his degree in English. He served as an assistant coach for 11 years before becoming the head football coach in 1983. In 1988, he made school history when he guided the Wildcats to their first football state championship.

The results that followed, especially in the 1990s, were unprecedented. From 1991 through 1995, Kyle guided the team to five consecutive state titles, including two national championships. It remains one of the most remarkable feats in the history of Ohio high school athletics—and is just one of many noteworthy coaching achievements.

Kyle feels strongly about Franzinger as his successor, whom he coached and now has worked alongside for several years.

Franzinger, who earned a scholarship as a walk-on at Ohio State, is excited for all that awaits him.

That mindset is reflective of what Kyle has said in the past. Indeed, Chico refers to his 50 years at Saint Ignatius as a vocation—not a career—and a way to shape the lives of the young men whom he has led.

“You have this opportunity to show kids if they really love what they’re doing and they put a lot of energy into it and they put that kind of work ethic into things, good things can happen,” he says. “If you have that work ethic, you have a chance to be a champion.”