In the midst of an epidemic, families celebrated in different ways. Jim Brennan '85 played the bagpipes for his mom, Lee, who is in a nursing home.

Yesterday's St. Patrick's Day was unlike any other.

With no parade, no public Mass, and no public gatherings, the day was quiet for most folks.

But despite the cancellations, a number of Irish-Ignatian families continued to celebrate in their own small ways at home. Saint Ignatius has many close Irish connections, from its coaches to student-athletes to parents and grandparents. This article is a story of them, and how they remain close as families in these trying times, celebrating Irish culture and heritage on the feast day of Ireland's most remarkable saint.

Social distancing is a new phrase for many, and it impacted the Conways' plans. Typically, this Irish clan will head to the St. Patrick's Day parade and visit Frank's parents (Aidan's grandparents). But unfortunately, the family's patriarch, Manus, is in a nursing home, so the Conways sent greetings from afar. Manus immigrated from a village called Ballycroy in County Mayo and is a big Saint Ignatius fan, raising five kids through Catholic school.

With St. Colman's closed and no parade, the Conways instead head to Our Lady of Lourdes Shrine in Euclid, which has an outside walk of the rosary. When the Conways came to America, they found a home on the east side of Cleveland. Now, the Conways live in Lakewood, so after the jaunt to the east side to see their old home, they enjoyed a small gathering at Clifton Beach. They raised the Irish and County Mayo and had a small fire on the beach, adding some turf from Ireland. Cousins Dave Campell and Patrick Campbell '18 stopped by with an accordion, too.

Upon returning home, the Conways munched on some Irish snacks, including Crunchies, Cadbury Chocolate, Lucozade, Tato crisps, and Soda Bread. Then for dinner, the tight-knit family delved into some lovely corned beef and turnips. Some card-playing (Twenty Five and Nap) takes place along with conversation relating the Cleveland Browns' struggles to County Mayo's long title drought.

For the Conway family, St. Patrick's Day is all about faith, family, and fun: a care-free day that celebrates the Irish.

St. Patrick's Day is a special one for the McLaughlin family.

Each year, the McLaughlins toast and say prayers for family who came from Ireland, "the land of saints and scholars," as Mike might say. In his case, his grandfather (Peter), and great-uncle (Marty) came from Mulranney, County Mayo. While Mike's grandfather passed away before he was born, Uncle Marty became like his grandfather.

Marty McLaughlin was a legend in Northeast Ohio. Along with Peter McLaughlin, an uncle of Mark Hodermarsky, and two uncles of John Cooney '67, Marty helped to carry the Cleveland Shamrocks to the US Open Cup in the 1930s. The prize was given to the best club soccer team in the United States. Marty served in the U.S. Army during World War II, landing on the beaches of Normandy on D-Day. After the war, he helped to build the West Side Irish American Club and the Gaelic Athletic Club. He was honored as the Grand Marshal of the St. Patrick's Day Parade in 1982. Mike's youngest son is named in honor of him.

So, on Tuesday, the McLaughlin family commemorated all who came before, enjoying a wonderful Irish breakfast of eggs, toast, and tea, before eating some tasty corned beef for dinner. Typically, the family would head to St. Colman's for Mass and then to the parade, but this year, the McLaughlins prayed at home, and watched a few Irish classics, such as the Waking of Ned Devine.

Without a doubt, Irish eyes up above in heaven are smiling down upon the McLaughlin family. 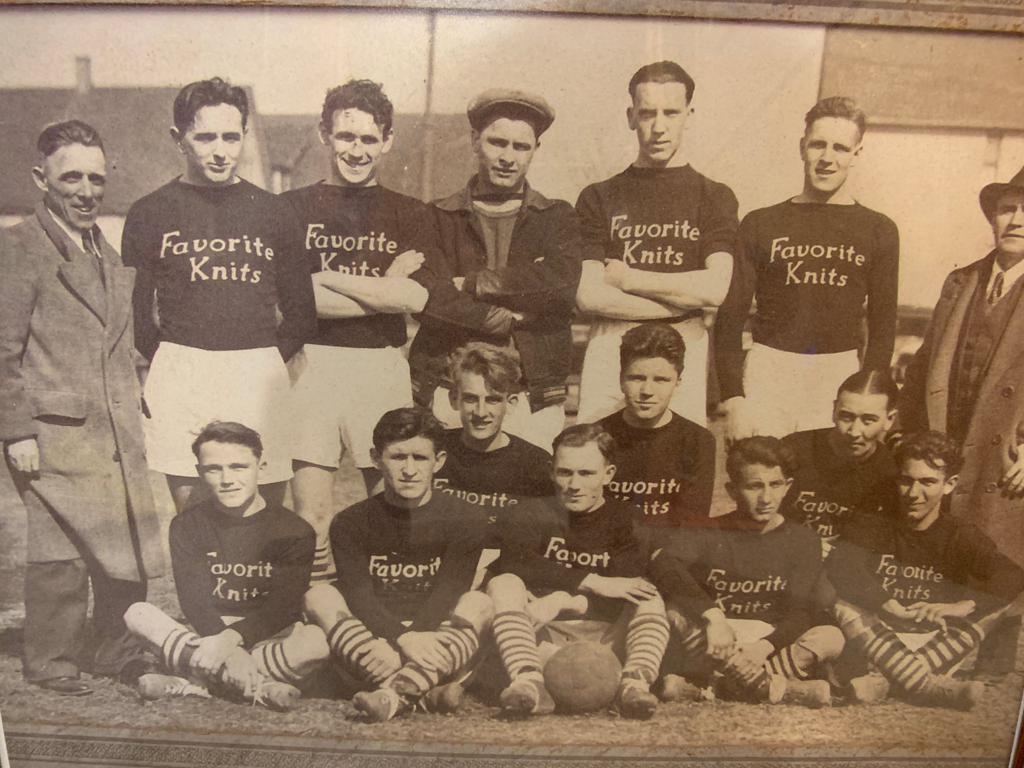 The Cleveland Shamrocks in the 1930s, the US Open Cup Champs.

Throughout the years, one tradition has remained for the Cooks: A family dinner on the night of St. Patrick's Day.

The best part? The leftovers are turned into homemade corned beef hash the next day.

The nationwide movement of colleges transitioning to online classes is a blessing in disguise for the Cook family. For the first time in a while, the Cooks were all together on St. Patrick's Day.

Jack '16 is finishing up his studies as an economic major at Harvard University, while Ryan '17 is a junior at the University of Notre Dame studying business analytics. Henry '20 is currently a senior at Saint Ignatius, a multi-sport athlete who recently won the Inspiration Award from the Mike Cleary '53 Northeastern Ohio Chapter of the National Football Foundation.

With the danger that the coronavirus poses to older folks, nursing homes have been largely shut off from visitors. That didn't stop the Brennan family from visiting the family matriarch, Lee Brennan.

Jim Brennan '85 led the way, playing the bagpipes outside of his mother's window.  Kristin, Annie, Danny, and Katie follwed behind with "Love You Grandma" and "Happy St. Patrick's Day" signs. Lee Brennan watched from her balcony, smiling all the way.

Watching a video of the spectacle, no Irish eye would be dry.

After the fun visit, the Brennans returned home, enjoying some home-made corned beef and soda bread. 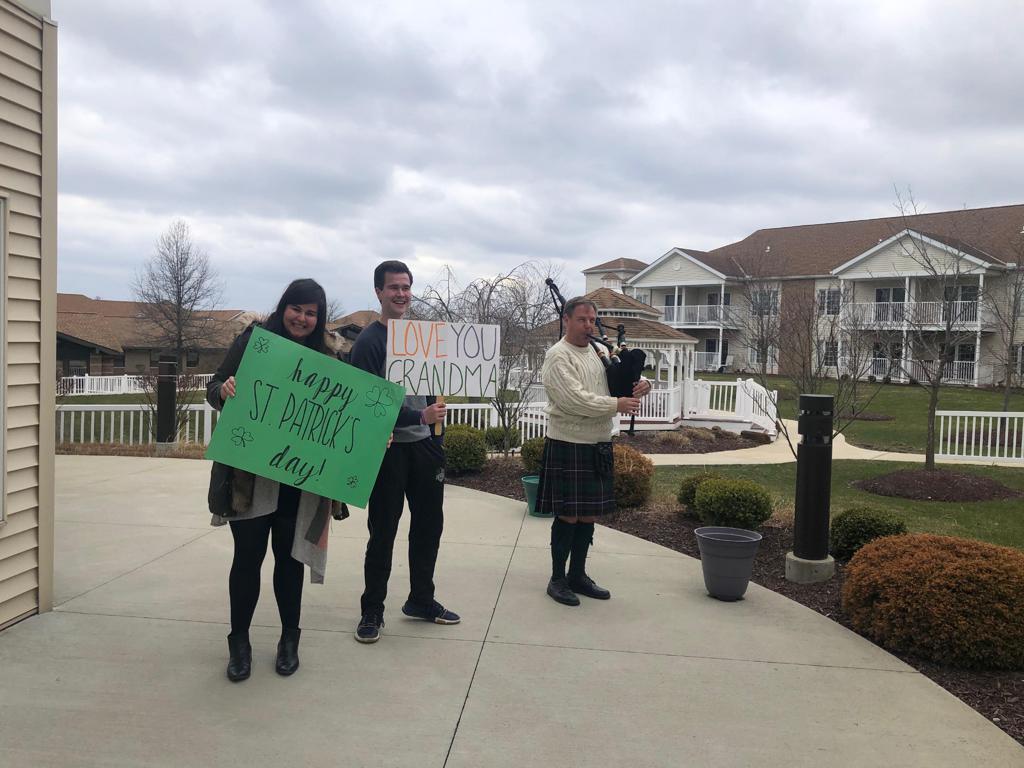 Jim Brennan '85 plays the bagpipes while Annie and Danny '19 held up signs for their grandma, Lee, who is in a nursing home.

If you read the Ohio Irish American News, you'll see plenty of the Mangans.

Susan Mangan is a columnist for the monthly paper, often contributing a wonderful column. This month's article talked about soda bread, and as Mike '19 and Declan '21 will avow, their mom makes the best Irish breakfast.

This year, the Mangan clan kept it simple. With some Irish music playing in the background, the Mangan family enjoyed a tasty Irish breakfast/brunch, celebrating with the ones that matter the most.

And we need to give a big shoutout to the matriarch of the family – Kathleen Mangan.

For 33 years, Kathleen worked at Baldwin Wallace University in the ID Department. She's remained very involved with the WSIA, Mayo Society, and the Cleveland Irish Cultural Festival. She also often travels back to Ireland.

The proud mother of two (Michael '86 and John '90) and grandmother of six (Katie, Michael '19, Declan '21, Allie, Jack, and Conor), Kathleen very deserving of the award, as her bio states: "Kathleen values faith, family, and heritage, dedicating her life to her family and many Irish organizations. Proudly, she shares her knowledge and love for Irish culture with all who know her. With humility and selflessness, Kathleen serves her culture and family, truly a beloved Irish Mother of the Year."

To Mary and Marty Walsh, their Irish heritage has been ingrained since birth.

Marty '89 and Mary, the chair of the counseling department, both grew up in Cleveland and involved with Irish culture. Typically, the Walshes will head downtown to watch the parade and meet up with relatives. Lots of singing and step dancing is involved.

With this year's parade canceled for the first time in recent memory, the Walsh family decided to bring Irish cheer to folks. The Walsh family dressed in green, visiting homes of family and friends by singing Irish songs outside. All bundled up, the Walshes stayed warm and took joy in being together.

The Walsh clan stayed true to its food traditions, too, not canceling its big corned beef order from A Luncheon Time, which is owned by a Saint Ignatius family. After eating some, the Walsh family dropped off sandwiches with friends and family, while maintaining social distancing.

All along, the Walshes had plenty of fun and bonded as a family. And after all, isn't that the point of St. Patrick's Day?

From our family to yours, Sláinte and Erin Go Bragh!